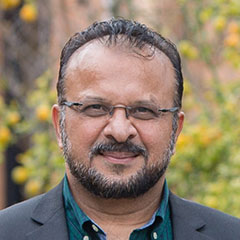 The decades of 1960s and 1970s was a transition for the worse for CMS. As the government took over the schools, the church administration which used to manage the school, lost its interest. The support for infrastructure dwindled. If something broke, it never got fixed. Buildings, sports facilities, furniture, equipment, all deteriorated over time, never to be replaced or repaired. The quality of students also went down. Previously, distinguished alumni would want their kids or siblings to join CMS. With free tuition and declining standards, more of higher quality students either did not join or opted to transfer to better schools for a chance at brighter future.

However, there were a few glimpses of brightness. Some academic and extracurricular activities which had a strong foundation earlier, continued to thrive albeit at a slower pace. Some senior dedicated instructors continued to inspire students.

The school would occasionally produce a merit scholar. For example, Aslam Merchant, made it to Karachi Board merit list, then went on to claim a position in the higher secondary board. He later went to US to study engineering on a Dawood Foundation scholarship.

Cricket, scouting, track, band and a few other activities still made a name on national level. Haroon Rashid and Javed Miandad made it to the national cricket teams. CMS represented Karachi and Sind in national scout jamborees in Dacca (1970), Islamabad (1973), and Lahore (1976). School participated in athletic events and the band to cheer the crowds at school events.

As the law and order situation worsened in the city, the school, located close to low income areas, also suffered also. It went through total oblivion during the following few decades.

A few years ago, some dedicated alumni started taking Interest in development of the school. The goal of the alumni association is to raise the standard to compete with top private schools. A government school, where people would want to transfer their kids from private schools. Since then, it has seen a revival of academic and extracurricular activities. A modern library has been established.Cricket, basketball, and scouting have been revived. Annual functions are being held at the school to encourage the students and enhance alumni support. More is to come. Stay tuned!